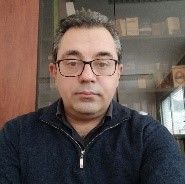 Coordinator, SFERA III Project
Italy
Ph.D. Walter Gaggioli (M), received academic degree in Electrical Engineering (Rome, 1996), and was later awarded as Ph.D. in Energy at the Department of Nuclear Engineering and Energy Conversion, University of Rome "La Sapienza" with a thesis about CHP systems integrated with technology thermodynamic solar. The thesis was awarded at the III edition of BIC Lazio. After gaining experience in the field of design and energy consulting, from 2002 he has been working as researcher in the ENEA Division of Solar Thermal Energy. He was the ENEA technical-scientific responsible of the following EU Projects: SFERA I, II and III, STAGE STE (coordinator of the WP7 – Thermal Storage) HITECO, IN-POWER, RESLAG, EuroPatMos. Between 2015-2019 was Coordinator of the H2020 ORC-PLUS Project; Currently is the coordinator of the Sub Programme of the Thermal Storage of the EERA CSP Joint Programme, and is responsible of Solar Thermal, Thermodynamic and Smart Network ENEA’ Division (TERIN-STSN).
Sessions