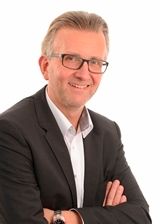 Oliver Then has worked in the RWE Group, a leading European utility, since 1991. Starting as a young engineer at the generation arm of RWE, he worked in different power stations. During the following years Oliver hold different positions within the RWE headquarters in Essen ranging from R&D project management, power plant project development and management to operational support of international affiliated power stations. For more than 10 years he has been working in the new build project department. Later he was heading the department for Mechanica lEngineering covering turbomachinery, water treatment, coal handling and thermodynamics and process engineering. The projects covered the full range of size, technology and fuels either in Germany and on European sites. He also supported international consultancy activities and internal organisation and efficiency projects.

In October 2013 Oliver Then joined VGB PowerTech e.V. (now under the new brand vgbeenergy) in Essen, the International Association of energy asset operators. Founded in 1920 vgbe with more than 420 members is supporting their operational business and strategic challenges. Key tasks of the association are know-how management and dissemination, publishing of industry standards and technical publications and engineering consultancy. At vgbe Oliver Then was at first overseeing Power Plant and Environmental Technologies covering all aspects of conventional power plants and environmental issues. Since 01 April 2018 he was appointed Executive General Manager of VGB PowerTech e.V. as well as its service company PTS GmbH and the VGB Research Foundation. Under his lead vgbe is focussing on all aspects of the future energy system with a specific focus on RES and hydrogen.

Watch the Interview with Oliver Then here:
How VGB PowerTech is navigating Germany’s new energy landscape