Will the pandemic kickstart a green recovery?

“I think what we’re seeing now is a real commitment to use the energy transition as a means to come out of the pandemic in a more positive way.”

So says David Bryson, chief operating officer of Uniper, when asked if he is optimistic that the current pandemic could speed up Europe’s energy transition?

“Europe’s energy transition is a major change programme,” he adds, and requires people, politics, individuals and governments to think about things in a different way.”

And I think what we’ve seen with the pandemic is that it’s also created that sense of a need for change in what we do. And so it’s actually not a question of either we come out of the pandemic or we achieve an energy transition.

“I think what we’re seeing now is a real commitment, from the European Parliament made and partners around Europe, to use the energy transition as a means to come out of the pandemic in a more positive way and in a better situation than we went into it.

“So I’m optimistic that it will happen, and certainly from our perspective in Uniper, that’s how we are addressing the challenge.”

When asked if he believes the carbon neutrality goal that Europe has set for 2050 is an achievable target, he stresses: “Of course is achievable if everybody gets behind it. I think that’s the key.”

In terms of what Uniper is doing, he adds: “If you look at our European generation fleet, we’ve set ourselves a target of carbon neutrality by 2035. So 15 years earlier than 2050, and that’s quite a challenge for us. And it’s going to require some clear measures and steps to achieve it.

“But I think what we mustn’t forget is that this is not just a question of the energy sector, per se. To achieve this target, industry also needs to change and transport needs to change, housing and infrastructure needs to change. So it’s a complex problem that needs to be addressed.

He says companies like Uniper “are working with our industrial customers to try and find decarbonize solutions for them, which contribute towards 2050. Because they, as our customers need that.”

“We are building up our energy efficiency services, so that we can provide that to customers, so they understand how they can use less energy, and then linking that to a low carbon solution, again, contribute to those 2050 goals.

“So it’s very much a solution that needs the contribution of everybody, both companies like ourselves, the customers out there in the different sectors and also, of course, governments who need to create the right incentives and the stable investment environment for us to contribute to achieving this change over that time period.

“We talk about an energy evolution rather than an energy step change and that evolution needs confidence for investors: confidence that they can invest in the infrastructure that will be needed for some time, and that the rules of the game won’t be changed partway through their investment. And that I think, is also really critical.”

Does he think Europe needs to go further in terms of creating the right environment for long term investment for low carbon technologies?

“If you think about the success we’ve had with renewables, if you then think about hydrogen and the change we need in hydrogen, there’s no doubt that you need some form of stimulus to achieve that change.

“Again, it won’t be a step change, you won’t move from natural gas to green hydrogen overnight. We didn’t move from no renewables to onshore and offshore wind overnight. But they were supported in different ways. And I think governments need to think and reflect about that, to create that stable environment.

“Without that, it’s hard to imagine that those steps will be achieved. And we see that in some areas. Don’t get me wrong. If you look in Germany, you see real support for hydrogen, if you look in the UK, real support, and so we’re working with governments and with partners to try and achieve the goals that will support carbon neutrality by 2050. But it’s a partnership approach.” 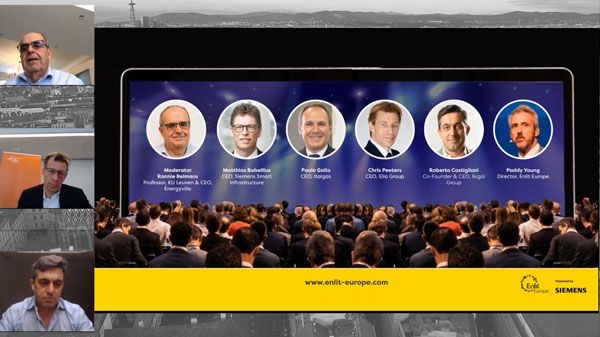 Enlit Europe’s Virtual Keynote posed the question: What if the global pandemic accelerated the green transition?