Through the development of Orca, Climeworks has been able to intensify the process of CO₂ capture capacity per module. This optimized process means that more carbon dioxide can be captured and stored than ever before.

Orca has a capacity to capture 4’000 tons of CO₂ per year, which will be removed from the air and stored permanently through a natural mineralization process.

Iceland’s Prime Minister Katrín Jakobsdóttir said at the launch: “For the first time the direct air capture technology is combined with the carbon storage technology – for a project of this scale – allowing us to permanently capture CO₂ already emitted to the atmosphere and safely and rapidly turn it into stone underground.”

The construction of Orca started in May 2020 and is based on advanced modular technology in the form of stackable container-size collector units.

These units are powerful and compact with a minimal physical footprint, making it possible for Orca to be operational in under 15 months. 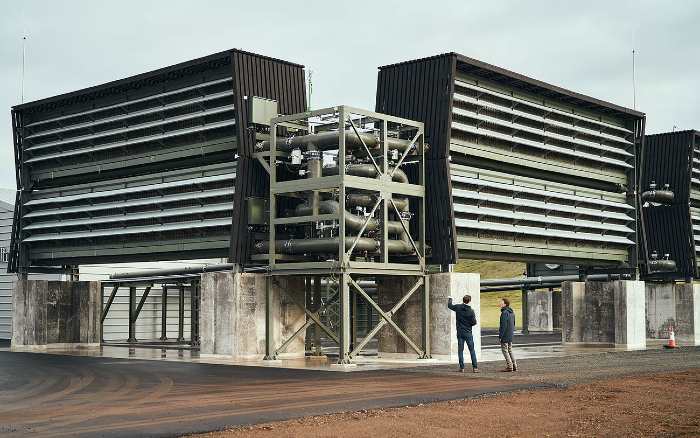 Orca has partnered with Carbfix, Islandic experts in rapid underground mineralization. Carbfix will mix the air-captured CO₂ with water and pump it deep underground, where it is trapped in stone through a natural mineralization process that takes less than two years.

Orca runs fully on renewable energy and has been strategically located adjacent to ON Power’s Hellisheiði Geothermal Power Plant.

Christoph Gebald, co-CEO and co-founder of Climeworks said: “We are proud, excited, and beyond delighted to have arrived at this stage in our journey to reverse climate change. Orca is now a reality and it is a result of concerted efforts from every stakeholder involved. I want to take this opportunity to convey my gratitude and appreciation to the Government of Iceland, our partners in Iceland, our trusted investors, our corporate clients and pioneers, partners, the media, and our team of Climeworkers in making Orca a reality.’’

According to Climeworks, the plant will eventually expand to megaton removal capacity by the second part of this decade.