Coal-to-Gas: a bridge to sustainability

Hartmut Oehme, Director of Brownfield Transformation for Combined Cycle Solutions, Siemens Energy
It is hard to imagine life today without electricity. It is fundamental to almost every part of our daily lives, whether at work or leisure.

The United Nations development goals point out that improved access to electricity worldwide is critical to alleviating poverty.

This, however, needs to be set against the growing concerns of climate change. There is a genuine need to decarbonise electricity generation to reduce CO2 emissions and meet at least the 2OC target of the Paris Accords.

But this is where a very real dichotomy occurs. At present, coal plays a vital role in electricity generation worldwide, with coal-fuelled power plants currently generating 38 per cent of global electricity.

In some countries, coal fuels a higher percentage of electricity. Despite protestation from within the coal industry, coal should have no role to play in the future electricity generation landscape.

When considering the road to a carbon-free future, it must be remembered that the energy transformation around the world is starting from different places and will proceed at a different speed.

The increasingly ambitious CO2 targets that are being set deliver a significant gap in outcomes that need to be closed. Three pathways can be followed to achieve this – the transition of the power generation mix, efficient energy management, and improved energy efficiency.

Today there is little economic reason to convert legacy coal fleets to gas; the driver is the pressure to decarbonise that is being driven by regulation and public opinion worldwide.

Looking at power generation, this transition follows three distinct time-based pathways. In the short term, it will be converting coal generation to natural gas, while supporting this through the mid-term, it will be aggressive renewable growth.

However, this is all driving us to the long-term solution to convert this natural gas infrastructure into a sustainable hydrogen ecosystem.

The most obvious and most common solution for the decarbonisation of the power generation sector has been, and is, the replacement of old, badly polluting technology by new, higher efficient, less greenhouse gases (GHG) and particulate matter- emitting technology – a bit like dumping your 20-year-old 6-cylinder petrol engine car at the scrap yard and replacing it with the latest hybrid or fully electric powered car. It sounds logical and is widely accepted. But it is also expensive.

Imagining the same approach of dumping an entire multi-unit coal fired power plant of the size a small city, built from thousands and thousands of tonnes of concrete and steel, being part of a fully developed infrastructure and connected to the local, regional and national grid.

The answer could still be to dump the asset and recycle as much of the useful material as economically feasible and replace the generation capacity with new installations of any kind.

But the answer could also be to transform the existing asset into a state-of-the-art power generation facility which is already pre-designed for the incorporation of future technologies like energy storage, energy conversion or carbon capture to achieve zero carbon emissions at the end of the transformation journey.

The very basis for allowing such full transformation is the shift from coal to gas firing through full repowering.

While the idea of repowering coal fired power plants is not entirely new and several large-scale projects during the past 20+ years around the globe have proven to be technically and commercially sound, repowering never grew out of a niche existence owing to the then valid economics.

As legislations and consequentially markets transition towards clear decarbonisation targets and concrete coal exit plans, repowering of legacy coal fired power plants is expected to experience a strong renaissance as it provides several beneficial characteristics compared to greenfield replacement solutions, such as:

As in most brownfield projects there is no one- fits-all solution for repowering of coal fired power plants. However, the principle approach is always very much the same, combining highest plant efficiency and operational flexibility with the maximum reuse of the existing plant equipment and infrastructure as technically, economically, and ecologically reasonable.

Besides changing the fuel source and incorporating newest gas turbine technology, this also includes updating the remaining equipment to the best possible functional and performance level.

The main principle of a full repowering involves the replacement of the original coal fired boiler with a heat recovery steam generator (HRSG) and a simple cycle gas turbine installation. 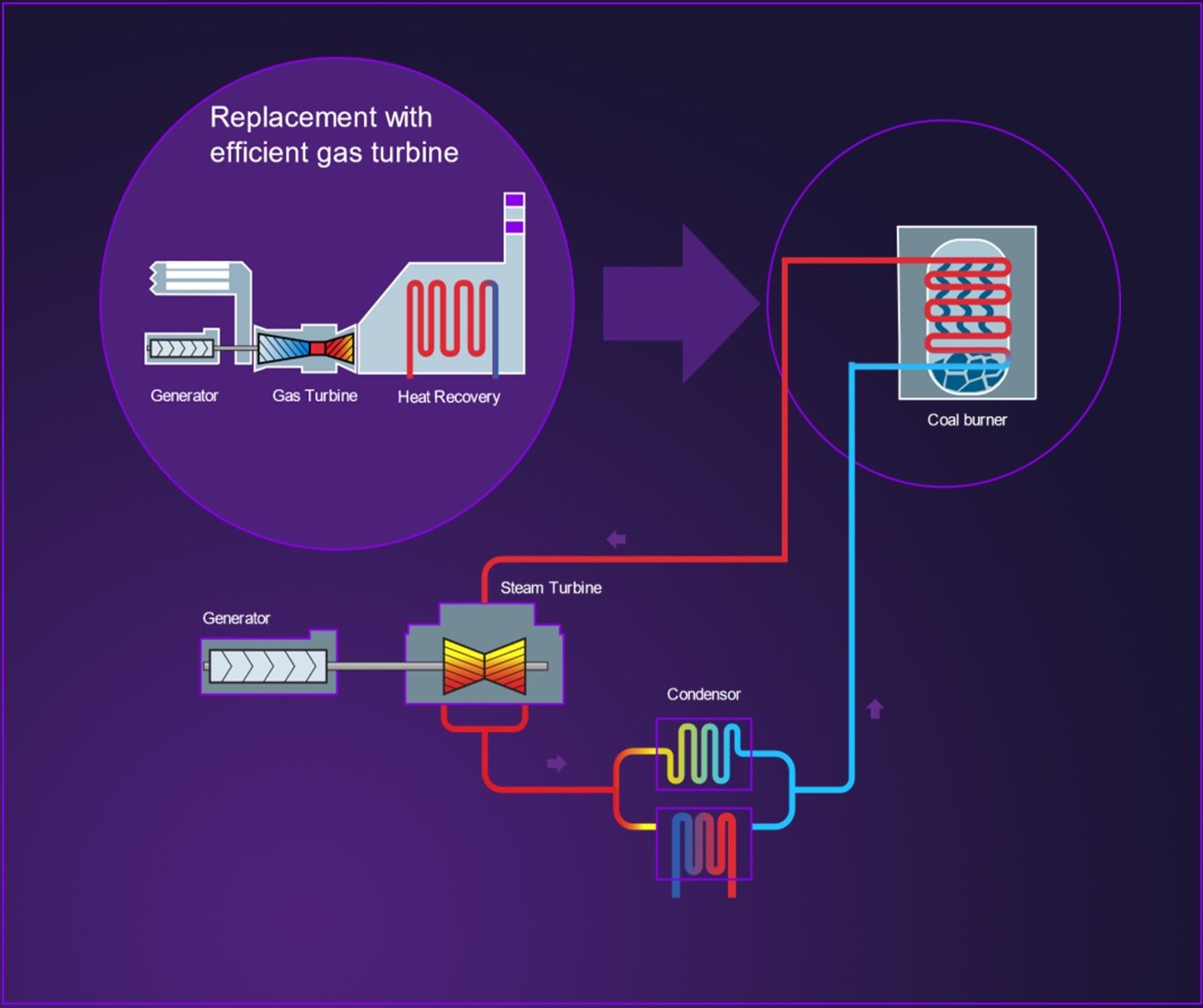 This would be connected to the steam turbine of the original plant. In order to provide the best operational and highest thermal efficiency of the future combined cycle power plant a steam turbine retrofit comprising latest state-of-the-art steam turbine technology is usually part of the repowering approach.

Depending on the site specifics, such full repowering can be implemented as a supplemental solution, where the simple cycle gas turbine installation and the HRSG would be built outside the existing turbine/boiler building or as an integrative solution where all new equipment would be installed within the boundaries of the existing plant buildings.

Both approaches have their pros and cons. While the supplemental outdoor approach requires enough free space for the construction of the new equipment at the plant location, preferably close to the steam turbine hall, the connection between old and new equipment is less complex and the overall downtime of the unit during the reconstruction period is shorter as a greater amount of the works can be done while it is still in commercial operation.

On the other hand, the supplemental outdoor approach is more costly and less sustainable as it requires significantly more new construction work and material compared to the integrative indoor approach.

While other repowering concepts like topping or boosting have their justification for meeting specific customer requirements and to increase the performance and fuel-flexibility of existing coal fired power plants, only full repowering can be seen as a solution which comprises both a significant immediate reduction of GHG emissions based on available technology and a long-term full decarbonisations potential.

Preparing for the decarbonised future

The decarbonisations of the global power industry will be diverse, complex and depending on the different regional circumstances and needs.

Still there is agreement today that natural gas will continue to play a significant role in the energy mix during the next decade and probably longer, and that it is considered to be the bridge to the hydrogen future.

With the coal-to-gas shift of coal-fired power plants the foundation is laid for the transition of valuable, but inefficient and environmentally harmful assets into a long-term clean energy scenario, using green hydrogen as the succeeding fuel, as soon as the hydrogen economy is in full swing.

In addition, such repowered and hydrogen ready power plants can play a central role in the further hybridisation of the power industry, providing the already existing infrastructure and grid access to feed electricity from renewable energy sources winto large-scale storage facilities, like battery or thermal storage and/or into electrolysers, to generate green hydrogen, which would fuel the combined cycle power plant. 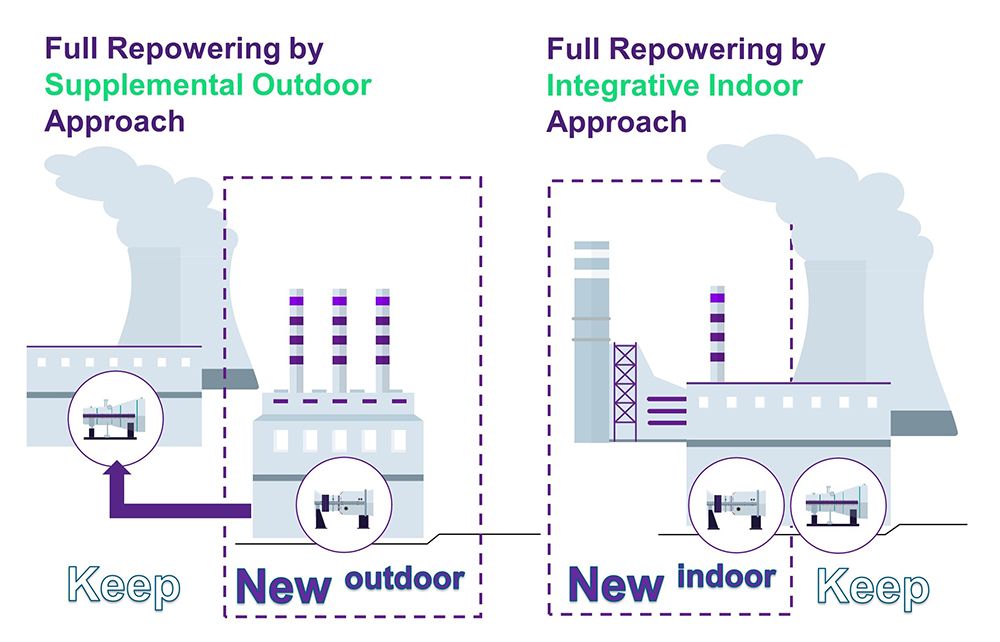 Beyond that, other solutions for heating, cooling or process steam supplies, grid stability services and/or operational flexibility can be integrated to maximise the exploitation and perfecting the interplay of all hybrid puzzle pieces within a seamless system of multiple and parallel working value streams.

At the end of the decarbonisation journey, such hybrid power plants would be integrated into a larger energy landscape, comprising of energy generation, transformation and consumption sectors.

Repurposing of legacy power plant infrastructure and equipment through repowering is a technically, economically and sustainably viable option to address todays and future demands during the transition of the global energy landscape.

All with limited negative – or even positive – socio-economic impact for the plant location. 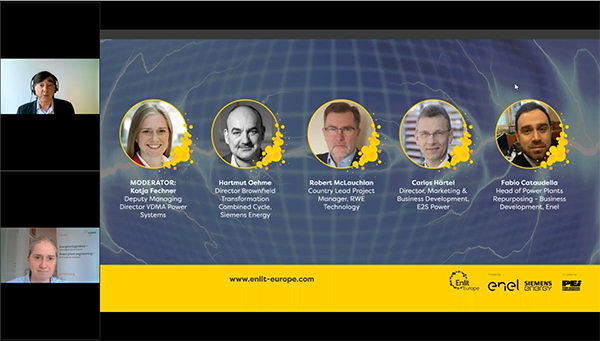