‘Today, hydrogen is anything but clean’ says Enel boss

The production of hydrogen today is a “climate killer” according to Carlo Zorzoli of Enel Green Power.

He said some “98% of it is produced from steam reforming and gasification, which equates to yearly carbon emissions comparable to that of Indonesia and the UK combined. Just 2% is produced from electrolysis.”

“Today, hydrogen is anything but clean. That 98% produced today is an industrial feedstock. Just 2% is produced from electrolysis.”

“Hydrogen today is not a solution to decarbonisation: hydrogen is a part of the problem. So the very first thing to do is convert grey hydrogen to green.”

Zorzoli, who is head of business development at Enel Green Power, was speaking in an Enlit Europe webcast titled ‘Scaling up renewables for smart electrification and carbon neutrality’, in which he stressed Enel’s belief that “electrification is by far the cheapest and simplest way to decarbonise our economies”. 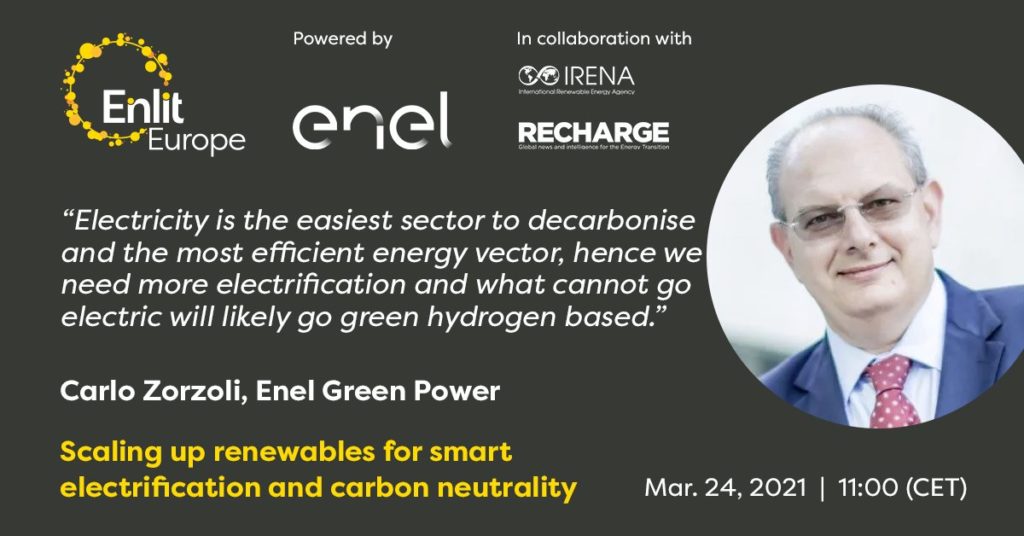 But he acknowledged that “of course you cannot electrify everything – and so there is a need for something to complement electrification. And green hydrogen is definitely a complement.”

And to make it ‘green’, he said it was a priority for the energy sector to bring down the cost of electrolysers.

“Because the future for the not-electrifiable sector relies mostly on hydrogen or hydrogen-based vectors. We need to focus on making green hydrogen cheaper.”

He said Europe’s road to decarbonisation was “a big task we’re on” and added that Enel Green Power had orgainised its sustainable business model around four major trends: decarbonisation, electrification; digitalisation; and new customer needs.

In addressing a question around what needed to change to speed up a greater deployment of renewables, he said: “We see a slow permitting process – and a lack of capability to deliver enough permits. We definitely have a problem – there is an issue of timing with permits and, in my view, permitting in most countries is a bottleneck.”

This was originally published on Smart Energy International.