Inside the brain of a hybrid power plant

Today, more and more energy-intensive industries – such as mining, steel, or chemical industries – turn to using renewable energy for their power needs.

Leading the pack, though, are the giants of the digital age such as Google, Amazon and Facebook. They are being compelled both by their massive and rising energy needs, as well as their commitment (and their regulatory obligations) to decarbonisation through renewable energy – mainly wind and solar – for their daily, globe-spanning operations.

By and large, they get their megawatt-hours through power purchase agreements. But it’s not just these major players that have a huge appetite for clean energy.

At the beginning of 2021, a market analysis by S&P Global identified 400 projects with PPAs with 120 US-based companies totaling 46,000 MW alone. Still, PPAs are not the only solution. Many companies – including those mentioned above – also turn to on-site renewable power production with their own data centers. And for good reason.

As every millisecond counts for data traffic, they need to be close to internet exchange points, usually situated in urban areas. At the same time, these digital nerve centers store and process more data every day, resulting in increasing energy consumption.

The consequence is that the local utility may not be able to guarantee the capacity needed for such a center, especially if several data centers compete for the local energy supply. The solution: on-site power plants.

However, with the continuous drive towards decarbonisation, they also have to use intermittent renewable energy. And that means hybrid power plants comprising renewable power generation, energy storage, back-up solutions, and possibly thermal storage for district heating, heat pumps, electrolysers producing hydrogen, and, last but not least, a smart flexible

Many companies face this situation today, be it their pulp and paper plants, mines, or steel mills.

Even whole municipalities might be keen on ensuring a steady energy supply in the face of increasing demand, their desire to shrink their carbon footprint or to simply have more control over their electricity bill. And today, with continuous innovation in the energy sector and decreasing prices for renewable energy, this is no longer a pipe dream, but a realistic option of how to drive decarbonisation.

Let’s take a quick look at some of the innovations and major changes that have happened over the last two decades that enable us to build these hybrid power plants today, as well as laying the basis for a new energy world.

For one, solar and wind energy are not just more efficient than ever before, but they have become affordable. They increasingly often have a lower levelised cost of energy (LCOE) over the lifetime of a renewable plant compared to a solely fossil fired one.

Second, as their power supply is fluctuating, energy storage solutions such as batteries, pumped hydro, or rotating grid stabilizers ensuring grid stability not only have become increasingly important, but tailored to the needs of renewables, making a steady increase in the share of fluctuating renewables feasible.

Third, digitalisation. With renewable energy generation having become decentralised, the linear chain from a centralised power plant run based on demand changed to a complex as well as dynamic network of distributed power generators.

What keeps them connected and controlled are not just power lines, but digitalisation – with an ever-increasing number of sensors, IoT-technology, 5G-networks, cloud and edge computing, advanced analytics, and intelligent cybersecurity.

The brain of the power plant in this context are digital management systems that flexibly as well as automatically manage fluctuating power supply and a plant’s energy needs.

So, just as our energy future is hybrid, on a small scale this future is already being realised today – on-site at industrial power plants. For sure, it’s not one-size-fits-all. Every plant needs its own customised solution.

That portfolio means you don’t have to rely on solutions solely based on single products but allows a much more technology-agnostic approach. But no matter which company a client ultimately chooses, it’s important to have the right competencies and specific know-how in order to find the optimal hybrid configuration for each customer, for which local conditions (e.g., wind speeds and solar irradiation), as well as customer requirements (e.g., percentage of decarbonization, minimising LCOE) need to be considered.

What does such a customised intelligent solution look like for electricity generation? Its key functional elements are renewables (wind, solar), which help to achieve a high level of decarbonisation. It is storage systems, such as batteries bridging fluctuations and enabling optimal use of available energy.

And it’s efficient gas turbines, ensuring availability during longer doldrums, which later may be increasingly co-fired with green hydrogen. Its brain, though, is the ever-important smart control system, without which running hybrid power plants that rely heavily on renewables would be impossible.

Siemens Energy’s digital control system for hybrid plants is called ‘Omnivise Hybrid Control’, based on the SPPA-T3000 technology with more than 3.000 installations worldwide.

It makes it possible to flexibly manage the unique setups that hybrid power plants consist of – with renewables, energy storage, gas turbines, and other assets – with one single operating system that’s easy to handle.

It comes with a remote or central control center based on a SCADA application server that allows the operator to monitor and control all plant processes. It stores all the relevant data concerning the plant’s performance. And it can be augmented with predictive modeling for early failure identification.

One module for the Omnivise Hybrid Control-System should be highlighted, though, and that’s the ‘Dispatch Optimizer’ providing economic dispatch optimisation based on weather forecasts, technical and financial measurements, and other parameters.

Let’s look at how it works by taking the weather as an example. The ‘Dispatch Optimizer’ calculates the optimal economic dispatch for all assets in a microgrid over the next 24 hours based on the weather and load forecast. This calculation is done every 15 minutes, and the setpoints are sent to the hybrid controller.

The controller in turn manages the microgrid in real-time by constantly monitoring the measurements and sending control signals to the generation assets on a sub-second timeframe. This maximises the productivity and efficiency of the plant.

In the same way, the ‘Dispatch Optimizer’ can also optimise production schedules, e.g. prepare to ramp up production when electricity demand is rising, or slow it down, when it is scarce.

Likewise, it can recommend revenue-optimised power generation and storage schedules. How? For example, by participating in arbitrage: storing energy when it’s cheap and selling when it’s expensive. And if – next to supplying one’s own plant – there is an agreement to deliver clean energy to another client, the Dispatch Optimizer helps to avoid PPA penalties by ensuring obligations are met. In short, this module is an important part of the ‘brain’ of the ‘Omnivise Hybrid Control’ management system, as it allows for optimal economic management of hybrid power plants. 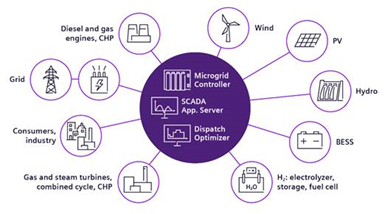 A precursor of the ‘Omnivise Hybrid Control’ was already piloted at the Isabela Hybrid Power Plant on the environmentally sensitive Galapagos Islands.

This hybrid power plant pilot included multiple energy sources, such as a photovoltaic plant; an array of biofuel generators; and an electrical energy storage system.

It started operations in 2019 and continues to smartly manage the requirements of the island’s power demands, which are mainly resilience, availability, and quality of supply. A key function is using weather forecasts and energy demand cycles, so it knows how to manage energy generation and storage. This successful first implementation showed that this smart solution can successfully integrate various components of a hybrid power plant.

Currently, Siemens Energy has several other hybrid power plants under development. There are basically two types. One is ‘Low Carbon Hybrid Power Plants’ that include photovoltaic and/or wind, gas turbines for residual power, and battery storage.

One step further, you have ‘Zero Carbon Hybrid Power Plants’ highlighting the increasing importance of long-term (hydrogen) storage. Such solutions may include an H2 electrolyzer, H2 fuel-cells, and H2 storage, next to photovoltaic and/or wind. Obviously, both types are monitored and controlled by the ‘Omnivise Hybrid Control’ operating system.

It’s clear that to change the world we need to do it one step at a time. And when it comes to trying to realise a decarbonised energy world by 2050, we have to recognise that it’s not just a tall order, but that it’s also complex.

And for this complexity – fluctuating renewables, decentralisation, various storage systems, etc. – to be manageable, we need intelligent tools that allow us to simplify it again.

With hybrid power plants and its intelligent controls, Siemens Energy is doing just that. It shows today how important it is to create tailored hybrid solutions for industry or municipalities for optimised energy production, decarbonisation, and economics. And it’s not just for their benefit.

As we do this, we also show that our goal of a decarbonised energy system is absolutely attainable.

This article was originally published on Power Engineering International